The Hindu : Friday Review Thiruvananthapuram / Music : Tuned to each other

Tuned to each other

The rapport between the Chinmaya sisters, Uma and Radhika, made their vocal recital a success.
The soulful pieces ‘Jagadodharana’ and ‘Smaravaramvaram’ were music to the ears and the concluding tillana in Kamas was full of verve. 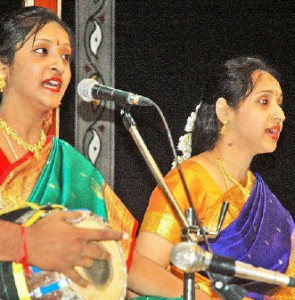 A vocal recital of the Chinmaya sisters, Uma and Radhika, revealed their excellent manodharma and erudition. The rapport between the sisters contributed to the success of the concert.

A brief sketch of Saveri by Uma preceded the Shyama Sastri composition ‘Sankari Sankuru.’ Radhika’s alapana of Vachaspathi brought out the subtle nuances of the raga. The Patnam Subramanya Iyer kriti ‘Ennadu Ni,’ with niraval at ‘Pannagasayana Pathitha Pavana,’ and the well-conceived swaraprastharas were well received by the audience.

After a quick rendering of the Tyagaraja kritis ‘Entha Muddho’ (Bindumalini) and ‘Kanukontini’ (Bilahari), Todi was taken up as the main item. While Uma’s delineation had some delectable sancharas, the beauty of this majestic raga was not fully captured.

However this was compensated by a beautiful niraval and imaginative swara patterns in the Tyagaraja kriti ‘Enduku Dayaradhura.’

The sisters chose ‘Subhapanthuvarali’ for ragam tanam and pallavi. They spun a plethora of innovative sangatis in the raga alapana and the development of tanam, revealing the extensive training they have received from their gurus T.N. Seshagopalan and Neyveli Santhanagopalan.

The pallavi ‘Neethu Padame Gathiyane Nammithi Sri Ramachandra’ in Adi tala and the brisk ragamalika swaras in Valaji, Saama, Kamas, Revathi and Kapi received an appreciative round of applause from the audience.

The soulful pieces ‘Jagadodharana’ and ‘Smaravaramvaram’ were music to the ears and the concluding tillana in Kamas was full of verve.

R. Swaminthan gave ample proof of his mastery in his violin accompaniment. His raga essays were precise.

The taniavartanam by Cherthala Ananthakrishnan on the mridangam and Papanasam Sethuraman on the ganjira was impressive.

The concert was organised under the auspices of Palghat Finance Society.